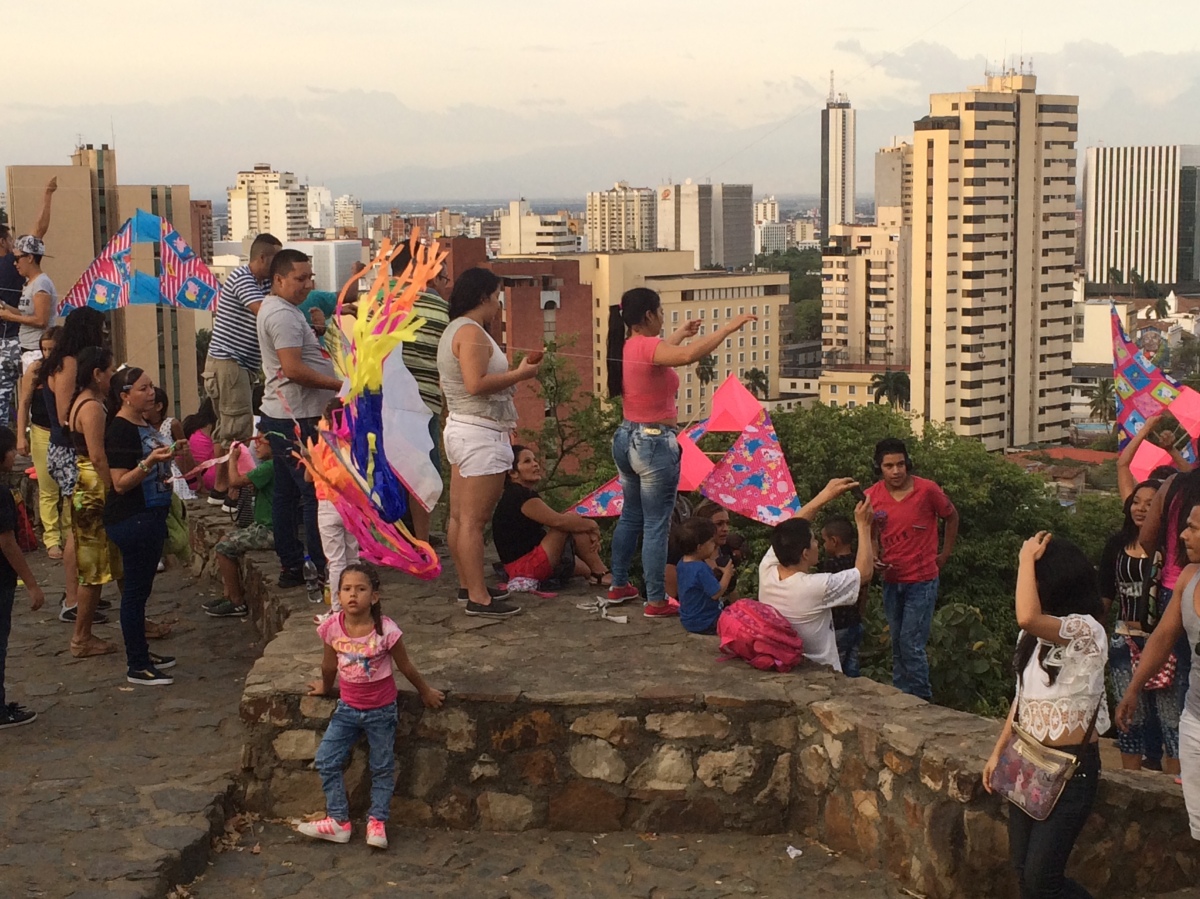 “Hey neighbor! How many do you want?”

“How much do the small ones cost?”

August is a month for kites in Cali, Colombia. That’s not to say that it’s the only time there is wind in the city; in fact a lot of people appreciate the fact that just about every day after 4:00 pm a breeze comes in over the Andes, from the Pacific, but August is the month to fly a kite.

Families pack into small cars and drive around, searching for the perfect spot: open, no electric wires, as few trees as possible, no buildings that will get in the way of the flight, and most importantly, windy. So, what was once just an empty lot in the city, or an open field on the side of the road, becomes a mecca during August for kite flying pilgrims.

Jairo Saénz Suarez is one of the sources for the multitudes of kites that are bought, flown, enjoyed, and many times lost, during this month. “I’ve had other jobs. I started working when I was 15. Of course, that was in the days before child labor laws, but I had a job back then.” Kite confection and sales is not his only source of income, he also runs a convenience shop. “I make food, too, but that’s a different story altogether.”

Jairo is what is called a rebuscador in Colombian Spanish. A person who, given their circumstances, does multiple jobs and scrapes together an income. In a country whose informal work force makes up a large percent of the total employed population, many people are forced into this lifestyle.

“You work from the 15th of July, you head out and sell. And I work until the 4th of September. I try to do it like this, but you could actually sell all year long, no big deal. People have it in their heads that the wind only blows in August. And, I don’t know why they think that. I see that in other countries, I see on the Internet, they’re flying kites. But not just in August! I don’t know if it’s because of the seasons, or vacations, or who the hell knows, you know?

“Those little ones are called tajaditas (slices) because they look like a slice of something. It’s like a slice of plantain, or, I don’t know… They change the names in other places. These others are faroles (lanterns). They’re traditional faroles, and you can make them smaller if you want. Or, four times this size. These are like 60 centimeters. But you can make them, like 1.5 meters, you see? But they start pulling like crazy when they’re that big.

“It’s important to have a good variety of kites. I mean, I, as a producer, can’t let a client get away, you know? Because this is a seasonal thing, and it’s for kids, you know? And a kid, you can’t punish a kid because you don’t have… because no, no, no… You have to help kids be happy, because we were all kids once, right? We were all kids once. So, since you didn’t have a kite, and, you know, as the saying goes: he got everything he wanted… but today… it’s important to help the kids be happy.

“Anyway, it’s important that you sell all the different kinds of kites, so that the client doesn’t get away. You have to take full advantage of the kite-flying season.”

An ice-cream vendor came down the hill toward us with his Styrofoam ice chest, topped with a custom plexiglass lid, so you could see the different colored ice-cream pops inside. “Hey! How’s it going?” Jairo greeted the vendor. “You going to have an ice-cream?” he asked me. I asked for coconut, Jairo had peanut. When I asked how much it was, Jairo said he’d pay.

“You see, that’s another thing. Between vendors, you can’t go gouging prices. We have to help one another out. You see? Because we’re all in the same story, the one they call rebusque (scraping together a living).

“Sometimes it’s windier in December or January than it is right now. But, the people have it in their heads that you fly kites in August. A lot of people have told me, “It’d be cool if you could fly kites every weekend.” Last year, an older woman, she was about 70 years old, with white hair, she came and just stared at the kites. She was looking at them and she said to me, “Mister, sell me one. They make me remember when I was a girl.” And she put that kite up in the air. She was there with her kite for a good while, and then she gave it to a kid who was in the park. That is something cool.