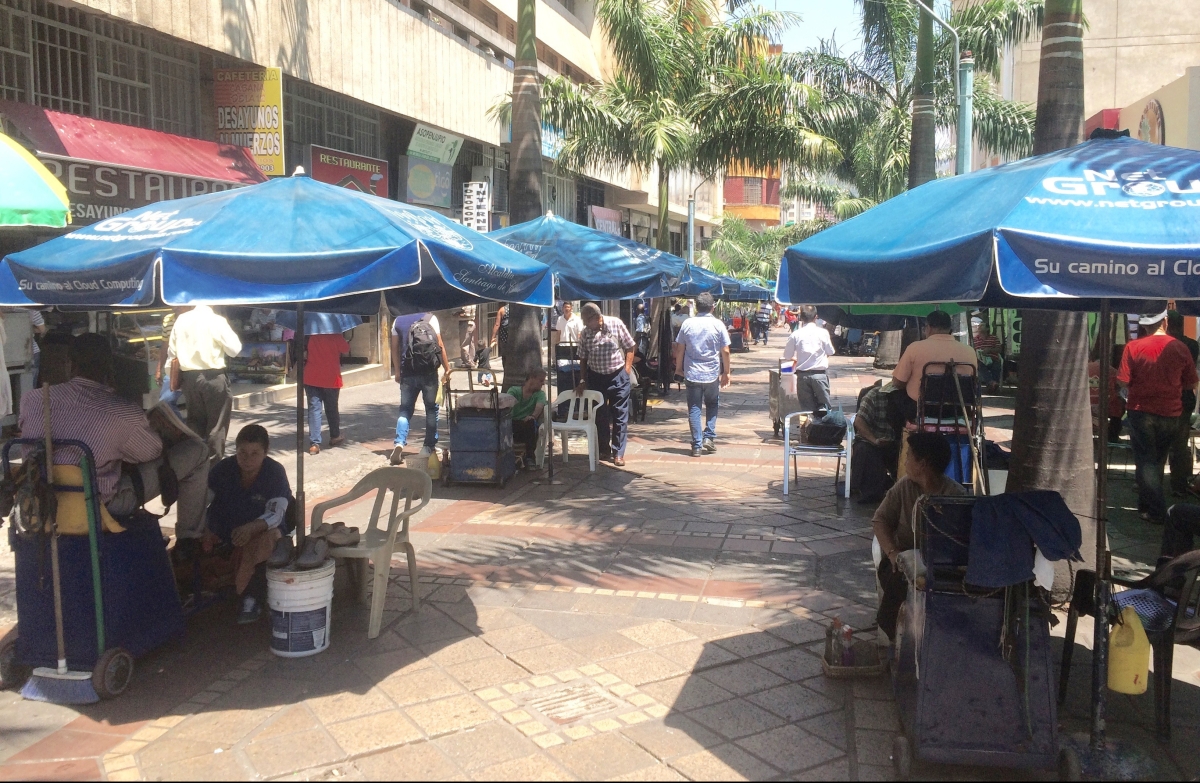 It is interesting to listen to people talk about what they do. It doesn’t matter how grandiose or menial their job. Everyone has something to say, and many times their words reveal just how meaningful their work is to their lives.

There are two types of shoe shiners in downtown Cali: the one that carries his wares in a small box and ambles under the palm trees in the central square hoping to spot a client or someone looking for some specific shoe related work, and the other, who has had a permanent spot with a chair and an umbrella for the last 12 years, donated by the local shoe polish company, Beisbol.

Raúl Armando is the first kind of shoe shiners. He is a 53 year old man, who has been working the downtown area for the last 20 years. “I’ve had other jobs, and good ones; I worked with the government in EMSIRVA (the public works department), and with the police,” he informed me, enthusiastically. But, he added, “But I was a bum and my own laziness ruined my chances for retiring with a company.” 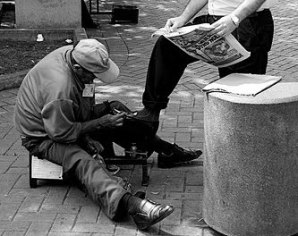 His little tool box, with its small pedestal that clients use to rest their feet on as they receive his services, is the most important thing in Raúl’s life. “For me, this is my wife, my mother, and all my family, because this is my livelihood,” he explains, giving it look of admiration. His trade is not lucrative, just bringing in what he needs to get by. A basic shoeshine costs $2000 pesos, about $0.70 US, $3000 ($1 US) if he applies shampoo and horse grease. If the shoe needs more elaborate maintenance, like rubbing out the scuff marks or dying it a different color, he can charge between $5,000 and $10,000 pesos ($1.75 – $3.50 US).

These rates require Raúl to live austerely. “I spend $20,000 pesos a day ($7.00 US). There’s breakfast, lunch and dinner, and my room that costs $7000 pesos a night. They come at 4:00 in the afternoon to collect the money for my food, so I’ve got to have that money by that time.” Due to a medical problem, he can’t resort to making ends meet in other ways, unless there are special events in the downtown area and he doesn’t have to move too far. He helps people park their cars in December, when the city center fills up. This means that he has a relatively stable economy during the holidays.

Fortunately, Raúl has a handful of returning customers, mainly judges and lawyers who work in the offices around the Plaza Caicedo, the central square. But things aren’t what they used to be 20 years ago. Raúl has seen how fewer and fewer people look for a shoeshine from him, and he supposes that it must have to do with people using cheaper shoes; they worry less about their appearance. That, and the increase in the use of tennis shoes are what have brought about a reduction in demand. But Raúl has adapted to these changes: “Of course, today I have to offer shampoo for tennis shoes. Otherwise, there’d be no getting by.”

Another change that has affected the shoe shiners downtown is the use of public space. This part of the city has seen high levels of mobile sellers, sidewalks crowded with people offering their wares: from underwear and belts to tape measures and books. And the city has tried to do its part keeping the sidewalk open for pedestrians.

“In February of this year (2016) they called us all into a meeting in the Lloreda Building. We thought that they were going to help us establish ourselves more permanently, but that wasn’t it at all. When we walked out of the building, at 10:30 in the morning, our spot was full of cops.” 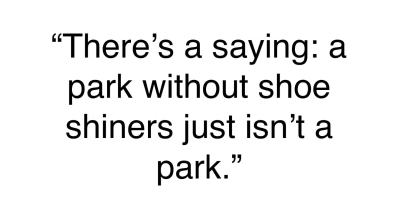 On orders from the mayor, the shoe shiners were given notice that they would no longer be allowed to “loiter” in a single place, but would have to walk continuously. For the time being, they’ve come to an agreement with the mayor’s office that they can gather on the sidewalk across from the Plaza, but there are “caretakers” of public space, who come each morning to make sure that no one is loitering.

Despite all the difficulties for the shoe shiners in the Plaza Caicedo, they keep a strict ethic regarding their trade. “The most important thing for me is that I do a good job, and that the customer feels happy about the product. If they can see that you’ve done a good job for $2000 pesos, then they’ll throw in another $1000 or $2000 as a tip. This feels right, because you know you’ve done things the right way.

No, Not a Shoe Shiner.

Cross the Plaza Caicedo diagonally from where the mobile shoe shiners are, and you’ll find 12th Street, la Calle Real – Royal Street. On this street, full of casinos and restaurants with their lunches designed for office workers, you can also find the lottery vendors and boot polishers who were relocated by the ex-mayor Apolinar Salcedo, 12 years ago. 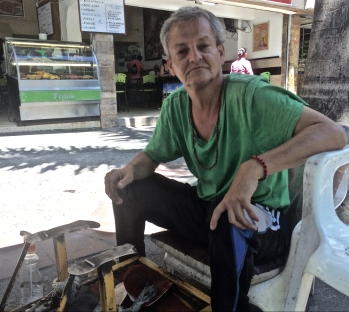 This is where Carlos Julio has his chair and umbrella, and where he continues to work after 21 years as a boot polisher. “A shoe shiner? No. I’m a boot polisher or a footwear beautifier. A footwear beautifier and image consultant. That’s what we do here. Embolador (shoe shiner in Colombian Spanish) isn’t even correct Spanish. An embolador would literally be someone who takes someone else’s clothes off for them.”

This clarification draws a clear distinction between the mobile shoe shiner and his counterpart with his fixed chair and umbrella. To give oneself the title of “footwear beautifier” is to assign a new meaning and value to the same job.

Like the mobile shoe shiners in the Plaza Caicedo, the boot polishers on the Calle Real have also been the victims of marginalization. According to Carlos Julio, they were kicked out of the Plaza Caicedo at the same time as the lottery vendors and the paper-pushing scribes because the mayor’s office wanted to “beautify the park”. But with the sponsorship of Beisbol shoe polish, from a nearby city, and the help of the ex-mayor, Mauricio Guzmán, the boot polishers were re-located on the pedestrian street adjacent to the plaza with all the required paperwork. 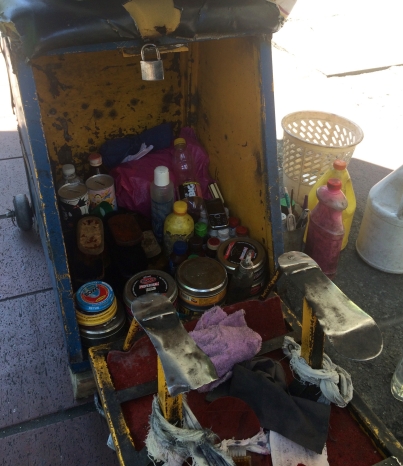 Another difference between the Calle Real boot shiners and their mobile counterparts is their price: $2500 for a shine, $4000 for a shampoo and sealer. But these extra pesos, which may be rightly charged by the privilege of having a fixed spot with a chair, do not mean these footwear beautifiers are by any means making significant money. The difficulties are the same one both sides of the plaza. “You might make 10, 20, 30 or even $40,000 pesos ($3.50 – $14 US) a day – but not all that often,” explained Carlos Julio. “It’s a job that varies on a daily basis. You get here and it’s just luck that your clients show up.”

Shoe shining is a job that is part of what is referred to as el rebusque in Colombia, or the activity of hunting down odd jobs in order to make ends meet. These types of jobs offer a certain freedom: no fixed schedule, you can be your own boss, and you are part of a community of people sharing the same needs. But this informality leaves a lot to be desired. The majority of workers live day to day: there are no savings, and no pensions. The two shoe shiners have access to health care through Social Security which gives them basic care when the need it, but nothing more. In Raúl Armando’s case, not following the treatment recommended by his doctors has left him solely responsible for his own treatment, and he has lost the right to return to the clinic.

Even so, Carlos Julio made a very valid point with regards to the manner in which one works. He said, “You adapt to the job because you need it. It is important that you feel good with your work. Feeling good about it brings satisfaction.”

It’s not a glamorous job, and it doesn’t fill their wallets with cash, but the shoe shiners keep shining shoes. They go to work every day with the tools of their trade, they greet the people and chat about the day’s events, and they shine strangers’ shoes until they glow. Their presence in the plaza in downtown Cali is a reminder that personal appearance is an important value to many people, and that public spaces are still used for meeting with people and working. In Raúl Armando’s words, “There’s a saying: a park without shoe shiners just isn’t a park.”

This story was originally published in Spanish on http://www.e-labor.co