Olga Avirama has been fixing broken suitcases for 50 years. In a world of cheap, disposable things, how can we use less by making things last longer?

Why don’t things last?  As a faithful consumer, you might be able to think back on your life as a string of purchases: your first TV, first car, first cell phone; and then all of the times you had to replace those items. Second cars, third, fourth and fifth cell-phones. Computers lose memory, battery-life fails, the soles fall off your shoes.

Planned obsolescence is part of the world in which we live. From the refrigerator that keeps your food cold to the light bulbs that illuminate your house, everything wears out and needs replacing. Some say it is a consumerist conspiracy to keep markets growing, others say that the lower quality goods means lower costs and easier access for those people with less buying power – actually providing people with a means of buying things that were previously out of their reach. But it is frustrating to think that the term “disposable income” is so literally applied to the money that is worked for and earned by whichever manner.

Olga Avirama, a 65 year old woman with roots in an indigenous tribe in the Cauca department in Colombia, has lived for the past 20 years counting on planned obsolescence as a source of income. She and her husband run “La Clínica de la Maleta” (The Luggage Hospital) in the First of May neighborhood in Cali, Colombia. 50 years ago, they started making suitcases and bags in their house, “But,” she explained, “since the markets opened up, artisans like us cannot compete with China.”

“The luggage they make is of poor quality. Really, people use a bag once, it gets damaged, and they throw it away. Our mission is to contribute to lessening the amount of garbage generated in the world.” And, help people save the $50 dollars they may have spent on a cheap bag, and turn it into a more lasting product by reinforcing seams, patching rips and anchoring the wheels so that they don’t fall off. 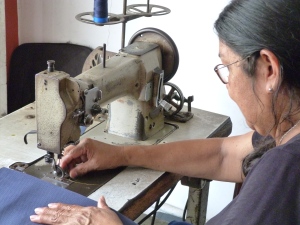 Like the SOP (Sin Obsolescenica Programada or Without Planned Obsolescence) movement in Spain, or many Do It Yourself programs, Olga is believes in things that are lasting, and that regular people can control quality. Her workshop has four Pfaff sewing machines, each one turned 50 years old this year.  “We only use two of them, the other ones we use for parts. I do all the maintenance on the machines and keep them working, After all these years I know very well how to do it,” she affirmed while switching on one of the machines.  “New sewing machines come with plastic parts that just don’t last.”

“We get by. We’re a family of five, and with the workshop we keep afloat, but by being very economical.” Olga showed me her small garden where they grow tomatoes, peppers, and various herbs in the front of her house. “People think it’s strange that we grow food here. It’s like they don’t like to be close to the earth. But we can cut back on spending by growing some of the things we consume.”

“There will always be luggage hospitals in Cali,” she pointed out. “The economy of this country makes it necessary that people find the way to stretch their money. We can’t afford to throw so many things away.”

So, while the shifting global economy has changed the way Olga Avirama and her family earn their living, it has also changed the way we treat the things we buy. Maybe there will be a time without luggage hospitals in the future, but hopefully it will not be because we have given in to disposing of the things that could be fixed.